This years' Commemoration Service was held on Thursday 4th July in the Dean's Garden, York Minster. It was a marvellous occasion with a rousing band and piper accompanying a very moving service dedicated to the brave men who took part in the battles. This 75th anniversary year was a particularly special occasion with the Archbishop of York giving the Address and many VIPs including our Patron attending the service in the beautiful and calm surroundings of the Dean's Garden, York Minster. 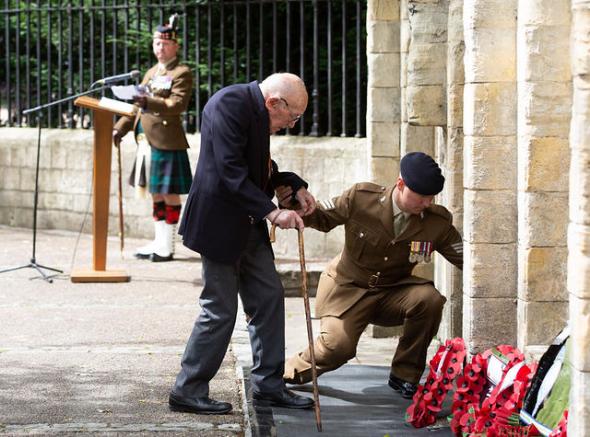 On the previous evening, Wednesday 3rd July, we held a film and talk at York University's Holbeck Theatre.  Military historians James Holland (pictured below right) and Robert Lyman (left) showed extracts from the film Imphal and Kohima: Britain's Greatest Battle and discussed the importance of this battle and that of the battle of Imphal which was taking place simultaneously further south.  There followed a fascinating Q&A session.  Rob Lyman also talked about the work of the Kohima Educational Trust. 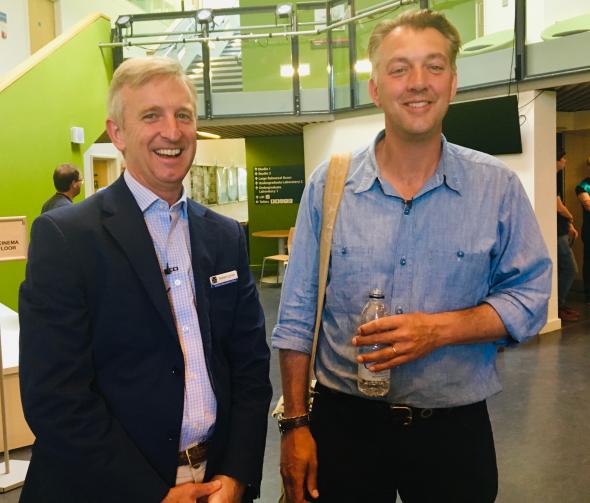 The video below shows our trustee Dr Ron Clayton explaining more about the trust's work:

The service each year in York is a wonderful opportunity for people to get together and this year, to our great joy, it was attended by a number of descendants of those who fought in the battle.

We were delighted that Harriet Getley, great grand-daughter of General Grover, was able to take part in the service and read the Kohima Epitaph.  Below is a video of the reading.

Another supporter, Erik Pearse, who never knew his father, first attended the York service in 2010.  His father, Philip Pearse, was shipped to India as a Major with the Lancashire Fusiliers almost a month after Erik was born, and was killed leading his company in the battle to recapture Firs Hill on April 28th 1944.  At York, Erik met a Lancashire Fusilier veteran, Andrew Watson, who was a Lieutenant in his father’s Company and had been with him just days before he was killed.

Here Erik takes up the story in his own words:

"I have no memories of my father, Philip Pearse, but he held me in his arms when I was a baby.

He got engaged to my mother whilst on holiday with friends in Norway, where my French grandparents lived, in 1938 or 1989.

When war broke out, my mother was in France and unable to cross the Channel to get married to my father.  Through family connections in the French Resistance, she was eventually able to get on a submarine in Portugal, which took her to England, where she was promptly arrested as a potential spy.  Fortunately, my father was able to get her freed and they got married in 1941.  I was born in January 1942, in time for my father to hold me in his arms before being sent to India, as part of the Fourth Brigade with the Lancashire Fusiliers to train in jungle warfare.  He became a Major before being despatched to Kohima with C Company, arriving at Golaghat Airport on April 9th 1944 and arriving in Zubza in April 22nd.  Following the Lancashire Fusiliers' transfer to Fifth Brigade, my father was killed whilst leading his Company in the battle to capture Firs Hill on April 28th.

Sadly I seldom questioned my mother about my father, so I know all too little about him.  However, I was fortunate to have the opportunity to visit his grave in the Cemetery in Kohima in 1966, when the area was out of bounds to tourists due to the state of insurgency between the Indian Government and the Hill Tribest.  I had been teaching in Laos for a year and the leisured Indian Ambassador there managed to secure me the necessary visas to get to Kohima from Calcutta.  It was my first, and only, visit to India and the intensity of the experience was quite overwhelming - memories of a desperate search in Calcutta for the place where I was staying - all I could remember was that it was close to a large pond - with a friendly Indian whom I approached to help me find my way, accompanying me for hours until I was safely home; the three-day train journey to Imphal as a lone European surrounded by ever-courteous, joyful and very inquisitive Indians, the welcome from a Naga Minister and teh drive to Kohima on a road full of military personnel; the staggeringly beautiful setting of the famous tennis court and wonderfully maintained Cemetery; coming face to face with my father's own grave.  Then the long journey back to Calcutta in intense heat and eventual arrival in Ceylon as it then was, weighing under 8 stone, to stay with, and sleep almost non-stop in my tea-planter cousins' bungalow.

A year lager, during a year's research in West and East Pakistan, I spent three weeks in Dacca attempting (successfully) to resuce the family goods of my university friend Alan Macfarlane from the docks where they had been held since fleeing from Assam during the Chinese invasion in 1962.  As a present for my endeavours, the Macfarlanes gave me a goat-haired Naga spear, a powerful reminder to me of the courageous support the Nagas gave to the British troops at Kohima.

Forty-four years later, in 2010, I received a phone call from Alan Macfarlane, who had become my brother-in-law following my marriage with his sister Anne.  As an anthropologist and co-author of Julian Jacob's book on the Nagas, he had been consulted by Fergal Keane for Road of Bones: the seige of Kohima 1944; he wondered whether I would be interested in attending the launch of the book in London.  I accepted Alan's invitation and had the great pleasure of being introduced to his friend Lily Das.  It was on that occasion that I first heard of the annual commemoration of the battle of Kohima in York.

This has now become an annual event to which I much look forward to.  On the second year of my attendance, in 2011, I learned that one of the veterans, Andrew WAtson, was from the Lancashire Fusiliers.  Intrigued to know whether he had known my fatther, I found that he had been a lieutenant in his company and even had photographs of the two of them on holiday together north of Bombay in 1943!  He was with my father two days before his death, when he was badly wounded.  Andrew's reminiscences of his time with the Lancashire Fusiliers reveal a truly heroic figure behind the unassuming text.  Our meeting led me to get hold of a copy of Leslie Edwards' Kohima - the furthest battle, where I was pleased to find a number of references to my father in the account of the battle for Firs Hill.

At the 2013 service, I had the good fortune to meet and befriend Dick Channer, who was with the 23rd Division on Shenam Ridge in 1942.  He informed me that he and his wife Christine would be visiting Kohima in December and wondered whether I would like to write a letter to my father, for him to place on my father's grave.

Writing to my father was a strange experience, drawing me closer to him than I had ever felt before - I struggled with what to say, but ended up with a few simple words, as follows:

Dear Dad, I never knew you though you held me in your arms.  I am so proud of you and look forward to seeing you where we will be together for ever.

This year in York the great grandson of Major Philip Pearse of the Lancashire Fusiliers, Louis Brennan, read the poem No Tears Were Shed at Kohima.

The poem was written by Sergeant John Done who fought in Kohima with the Lancashire Fusiliers.

Below is a video of Louis reading the poem:

The text of the poem No Tears Were Shed at Kohima 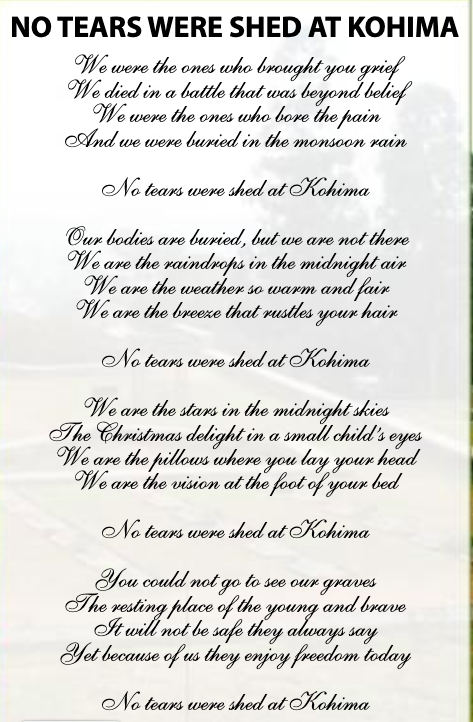 DONATE NOW +
The Nagas in The Battle of Kohima - film
A new film, produced by Charles Chasie for the RCEL (Royal Commonwealth Ex-Services League)
Learn more
DONATE NOW +
Nephew of Kohima soldier fundraising on VJ Day 75 weekend
Charles Barclay is the nephew of Lt Charles Barclay who was killed at the Battle of Kohima on 5th May…
Learn more
DONATE NOW +
KET presents the Sergeant Harry May Award - July 2020
The Sergeant Harry May (MID) Award for Leadership by a 2 Signal Regiment Senior Non-Commissioned Officer.
Learn more
We need your help. Donate today.